Addendum to My Medical Power of Attorney (PDF)

ETWN Live with Fr. Mitch and Dr. Joseph Eble discuss whether or not people diagnosed as ‘braindead’ are in fact dead, and what implications that has with regard to treatment and possible organ donation.

Imagine you are in a courtroom. You are a member of the jury. The question the jury is asked to consider is: Are organ donors, who have been declared “dead,” certainly dead before their organs are removed? As all jurors are asked to do, please keep an open mind. Do not pre-judge the case.

There are good people who support organ donation after a diagnosis of “brain death” and good people who oppose it. It is not my purpose to judge anyone who has donated or received an organ. I have no doubt that you based your decision on the best information available to you at the time. If you have undergone organ transplantation and, as a result, your health has improved, I thank God for your current good health.

Nevertheless, if, after considering the evidence, you find that there is a reasonable doubt that organ donors are dead before their organs are removed, your verdict should be, “Err on the side of protecting their lives.”

[This article does not address whether it’s safe for a healthy person to donate a paired organ or part of another organ for the welfare of a relative, friend or a stranger.]

In 1968, an ad hoc committee met at Harvard. Their report begins: “Our primary purpose is to define irreversible coma as a new criterion for death …Obsolete criteria for the definition of death can lead to controversy in obtaining organs for transplantation.” That was the birth of “brain death.” Notice that the committee’s purpose was not to determine if an irreversible coma is truly death. It was to establish “a new criterion for death” in order to accommodate the need to acquire organs for transplantation in their freshest state.

Before organ transplantation was possible, physicians made every effort to judge the moment of death in the direction of protecting a living person from a death-dealing mistake. Cardiac and respiratory functions had irreversibly ceased—the body was cold, blue and stiff.

“Brain death” is declared while the patient has a beating heart because removal of vital organs must be done before they begin to deteriorate due to loss of circulation.

There are many different sets of diagnostic criteria that may be used to determine “brain death.” Therefore, a person declared “brain dead” in one hospital might be considered alive and receive potentially life-saving treatment in another hospital. 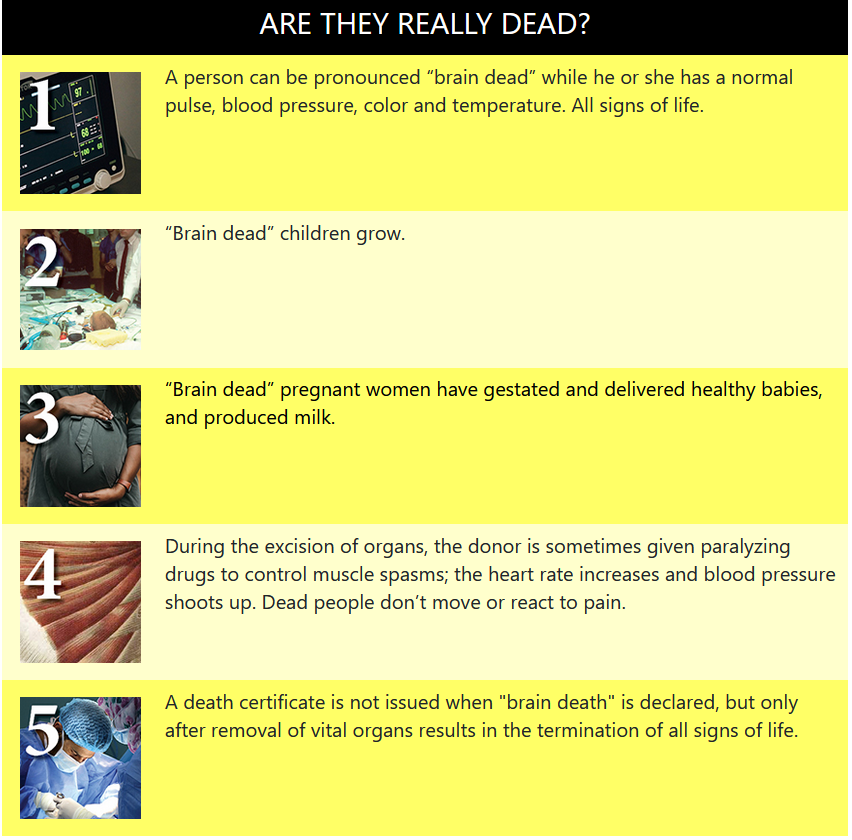 Numerous accounts of patients who have recovered after a firm diagnosis of “brain death” demonstrate that “brain dead” patients are not certainly dead. 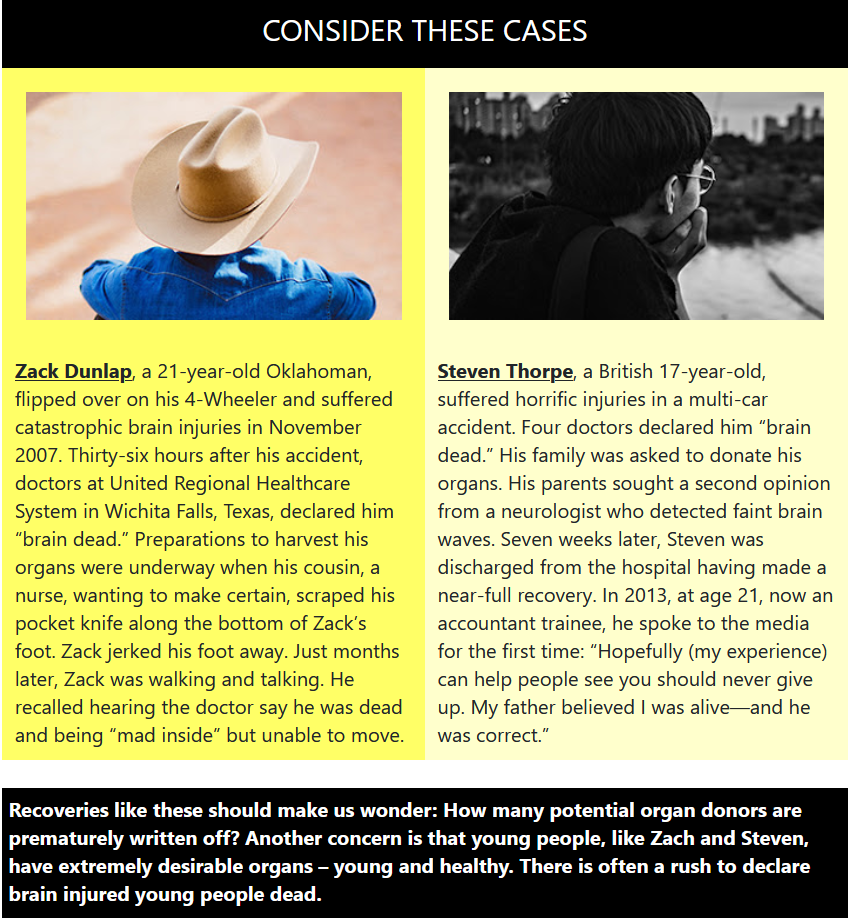 Jahi McMath On December 9, 2013, 13-year-old Jahi McMath suffered extensive bleeding and cardiac arrest following surgery to remove her tonsils and adenoids at Children’s Hospital Oakland (California). Subsequently, she was determined to be “brain dead.” Jahi’s family believed she was profoundly disabled, but not dead, and sought to have life support continued and the brain death diagnosis overturned.

Dr. Paul Byrne, a neonatologist who is a stalwart defender of life, stated in court documents that he witnessed Jahi moving in the hospital and that he considered her to be alive. Nevertheless, the family lost their court appeals. To make a long story short, Jahi was moved to New Jersey, the only state in the U.S. with a law allowing religious objection to a diagnosis of death based solely on neurological criteria. McMath’s attorney, Christopher Dolan, said, “There would have been no legal battle if Jahi had had her tonsils out in New Jersey.” [1]

After moving Jahi to New Jersey, Jahi’s mother lovingly cared for her until, on June 22, 2018, Jahi died from abdominal complications unrelated to her neurological condition. For more information on this case click here. 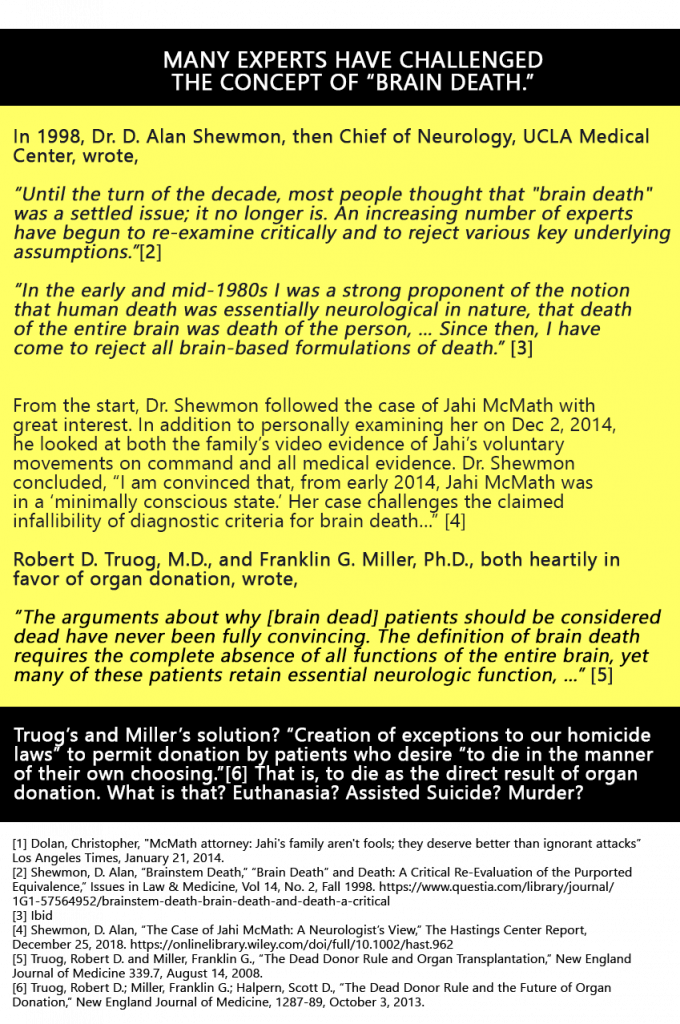 DCD donors are not “brain dead,” but are dependent on ventilators to live.

The patient, if competent, or family agrees to the withdrawal of life-support and to a DNR order; then consents to organ donation. Here’s what happens:

No one would consider a patient “dead” whose heart had arrested for 5 minutes or less—unless his organs are deemed more valuable than his life.

Most Americans do not know about the changes to their state’s Anatomical Gift Act. In 2006, the Uniform Anatomical Gift Act was revised to allow patients who have never consented to be organ donors to be considered “prospective” donors. A “prospective donor” is any patient “at or near death” who has not explicitly refused to donate his organs.

You cannot simply revoke your previous intent to be a donor. The UAGA states: “A donor’s revocation of an anatomical gift…is not a refusal and does not bar another person…from making an anatomical gift of the donor’s body or part…” 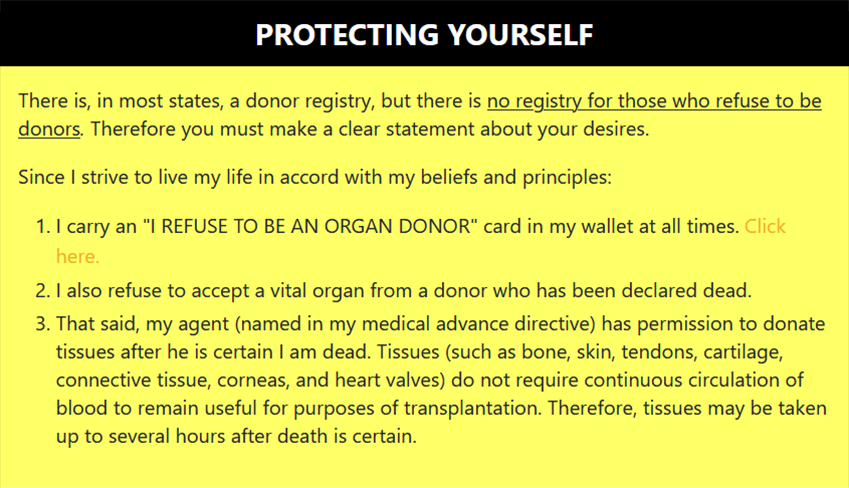 It has become an article of faith that a patient is dead when he is declared “dead” before removing his organs.

The facts are clear: The longer a medical team waits to procure the organs, the less likely the transplant will be successful. (Organs begin to deteriorate.) The more quickly they take the organs, the more likely is the risk of killing an innocent person. It’s a classic Catch-22.

Organ donation is a “sacred cow” that people are afraid to question or criticize. We must get over our fear of offending people. Of course, there is always the right place and time. But, if no place is the right place and the right time never comes, we can be sure that we are allowing fear of others’ opinions to get in the way of truth.

Well, Jury, what do you think? Should we err on the side of life?

The door to questions about the validity of “brain death” has been bolted shut by those who insist the case is closed. But the case is not closed. Increasing numbers of people are becoming leery of organ donation. The question of whether organ removal kills the donor cuts to the heart of the matter. Click here for a list of articles concerning the organ donation dilemma.