Supporters of abortion long ago argued that the act they championed was not murder because the developing fetus was not yet a human life or a person. Gradually, when this argument became harder to defend, mainly because of ultrasounds, the tactic used to champion abortion morphed into cries of “my body, my choice.” This slogan was used to justify convenience and pocketbook-protecting abortions, and it opened the door for debates about other ethical issues. If killing is acceptable when the youngest of children are not desired, logically, other groups of “undesirable” people can be “justly” removed from existence as well. Read more.

During these challenging times, we could use an uplifting story. This is that story.

The article Mom wakes from coma the day before she was supposed to be removed from ventilator recounts the true story of Lisa Martin. Lisa, a mother of four, was admitted to the hospital in September of 2020 for COVID-related complications. Lisa’s condition deteriorated, and her family was advised to say goodbye to her. The family, however, decided to wait 11 days before deciding whether doctors should remove Lisa’s ventilator. Ten days later, Lisa awakened from her coma, and in December, after being on a ventilator for 59 days, she walked out of the hospital and went home to complete her recovery.

Many refer to Lisa’s recovery as miraculous but keep in mind that her story, while amazing and wonderful, is not unique. Lisa’s family chose to give her more time before making a decision about stopping life-sustaining treatment. More time is what many patients need to wake from coma, but some are prematurely deemed “hopeless” and their treatment withdrawn because of “medical futility” decisions made by doctors and hospital ethics committees.

Whether Lisa’s recovery was a miracle or the natural result of being given more time to wake up, we thank God that Lisa survived and that her children still have their mother. 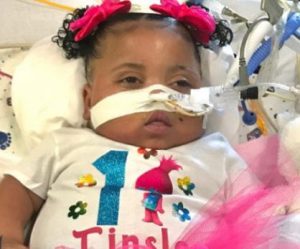 As we have previously reported, Baby Tinslee’s fight for life started in November 2019 when a Texas hospital moved to end her life against her mother’s wishes under the deadly Texas 10-Day Rule*. Since then, a fierce court battle has been waged, with Baby Tinslee’s mother on one side and Cook Children’s Medical Center in Fort Worth, Texas on the other.

When a Texas appeals court ruled against the hospital, it struck a huge blow to the Texas 10-Day Rule statute. Since then, each higher court, including the US Supreme Court, has prevented the removal of Baby Tinslee’s life support. On January 11th, the Supreme Court of the United States weighed in, letting stand the opinion against the 10-Day Rule, so the case will return to the 48th District Court for final adjudication. No court date has been set.

If the district court rules in favor of Baby Tinslee, the hospital will be permanently disallowed from removing the child’s medical treatment, including her ventilator, against her mother’s will. If this happens, hospitals across Texas will no longer be able to use the 10-Day Rule to hasten patients’ deaths. The result will be an incredible prolife victory in Texas!

Note: Texas Right to Life reports that they “saw a massive increase in hospitals’ use of the 10-Day Rule during the COVID-19 outbreak.”

With the Texas legislature convening for the 2021 session, everyone is looking to state lawmakers to abolish the horrific 10-Day Rule. We ask that you join HALO in praying that this rule will be abolished!

By Julie Grimstad, Board President

When a healthcare provider recommends palliative care or hospice, patients and their families need guidance so they can make the best life-affirming decisions possible in their circumstances. The Healthcare Advocacy and Leadership Organization (HALO) advises people to do their homework before electing a palliative care or hospice program. One place to start is HALO’s website, www.halovoice.org, which has many valuable resources, including fact/information sheets such as “Questions to Ask a Hospice BEFORE Admission” and “Drugs Commonly Used in Hospice and Palliative Care.”

The goal of palliative care is to relieve symptoms—including pain and stress—at any stage in a serious illness and can be provided in conjunction with curative or life-prolonging treatment. Hospice care is a subset of palliative care. It is focused on providing comfort care when a patient no longer has curative options or has chosen to forgo treatment because the burdens of treatment outweigh the benefits.

When palliative care is provided by healthcare professionals who have genuine respect for the life of every person committed to their care, it can be a blessing for patients and their families. Palliative care should never be used to cause or hasten death.

Unfortunately, there is a growing trend to misapply palliative medications to make people die, particularly in the hospice care setting.

Because people who are receiving hospice care have a limited life-expectancy, it is the “ideal” setting for stealth euthanasia – intentionally causing patients’ deaths while pretending to provide appropriate end-of-life care. Patients and families must be vigilant.

“Numerous reports from families of hospice and palliative care patients indicate that a one-size-fits-all pattern of administering a combination of opioids and anti-anxiety drugs has emerged. Whether or not patients have pain and/or agitation, they may begin to receive these drugs upon admission.” – “Drugs Commonly Used in Hospice and Palliative Care,” Making a Difference, A Guide for Defending the Medically Vulnerable, www.halovoice.org

A typical report that HALO receives from grieving family members is that their loved one, who had been alert and was not complaining of pain, was administered increasingly frequent and larger doses of pain medications and sedatives to the point where they were sleeping all the time and could not eat or drink. Some reported that patients were also denied usual medications to control blood pressure, diabetes, heart disease, infections, etc. Other groups receive similar reports. For instance, Murdered by Hospice, a Facebook group with over 700 members, exists to inform the public that hospice performs “euthanasia with or WITHOUT CONSENT” and states, “We are witnesses to medical murder of our loved ones.”

Is palliative care the antidote to assisted suicide?

There is merit in the argument that we should ensure patients do not choose assisted suicide because they are not receiving the best treatment available for management of pain and other symptoms of disease. However, Oregon’s experience suggests that palliative care is not the alternative or antidote to assisted suicide. An overwhelming majority of patients who have died by assisted suicide using Oregon’s so-called “death with dignity” law (in effect since 1997) have been enrolled in hospice care programs. The 2019 Oregon Death with Dignity Annual Report revealed that 90% of patients who killed themselves with a doctor-prescribed deadly dose of drugs were on hospice at the time of death. (https://www.deathwithdignity.org/oregon-death-with-dignity-act-annual-reports/)

The American Academy of Hospice and Palliative Medicine (AAHPM) “takes a position of studied neutrality on the subject of whether PAD [physician-assisted death] should be legally permitted or prohibited.” (http://aahpm.org/positions/pad) Neutrality gives the green light to assisted suicide as surely as support does.

Also, there is more than one way to assist a suicide. For instance, Voluntary Stopping Eating and Drinking (VSED) is facilitated by some hospices, particularly in states that do not permit assisted suicide by physician-prescribed drugs. VSED means that a patient, who is capable of eating and drinking, chooses to refuse food and fluids with the intention to cause death. This is suicide. When a hospice supports this decision by providing “comfort care” as the patient starves and dehydrates to death, the suicide is assisted – not prevented – by palliative care!

Fraud and abuse are widespread in the palliative care and hospice industries.

The U.S. Department of Health and Human Services Office of Inspector General (HHS-OIG), released the results of its work which identified thousands of Medicare claims that indicate abuse and neglect of beneficiaries (i.e., patients receiving Medicare benefits). (See https://oig.hhs.gov/newsroom/media-materials/2019/hospice/ for more information.)

For information about hospice fraud, simply Google “hospice fraud cases.” Prepare to be astounded at the extent and the dollar amount involved, and, even worse, the patient abuse.

Here is just one example. The FBI made arrests in February 2018 for healthcare fraud. Brad Harris, the owner of a Frisco-based (near Dallas, Texas) hospice company, his wife and 14 others were indicted in a $60 million Medicare fraud scheme that put financial interests over the needs of patients. Five of the defendants were doctors. Five were nurses. The FBI investigation, which began in 2014, initially focused on allegations that Novus Health Services sought federal reimbursements for patients recruited by Novus who did not qualify for hospice services and charged for services that were not medically necessary. Harris also had ordered nurses to increase drug dosages to speed patients’ deaths and maximize profits, according to an FBI affidavit. (Harris is an accountant, not a doctor.) Harris sent text messages to employees such as, “You need to make this patient go bye-bye.” https://www.runnelscountyregister.com/news/20190325/fbi-hosts-presentation-on-public-information-releases-and-procedures; https://apnews.com/14564cb7d90c44518ec08f4e13b0bfad/Ex-hospice-supervisor-pleads-guilty-in-$60M-fraud-scheme; and https://www.nbcdfw.com/news/local/fbi-frisco-hospice-owner-directed-nurses-to-overdose-patients/99824/

If you are considering palliative care or hospice for yourself or a loved one, do your homework. Providers who are doing things right and following the rules will be happy to let you know this and to compare themselves to other palliative care and hospice providers. Ask them for references – especially the contact information for families who have used/are using their services. Google the name of the hospice to check for fraud cases against it. Check out the records of the doctors and nurses providing care. To report neglect, abuse, or suspected fraud, call 1-800-MEDICARE.