By Julie Grimstad, Board President 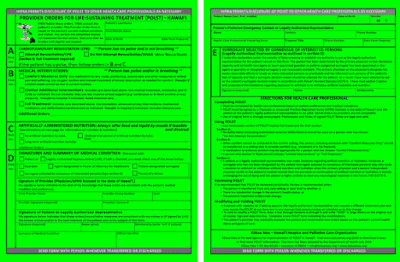 A brightly colored (usually neon pink, green or yellow) form that is very visible in a patient’s medical chart, POLST reduces complicated medical decisions to a “check the box” format. Trained “facilitators” (sometimes with little or no medical expertise) ask patients questions and check boxes indicating whether they do or do not want cardiopulmonary resuscitation (CPR), a ventilator, antibiotics, IV fluids, tube-feeding, and various other medical interventions. After filling out a POLST with a patient, the facilitator presents it to a doctor or nurse practitioner (NP) for a signature. Once signed, this unusual advance directive becomes medical orders that can go into effect even when a patient is fully capable of making his or her own medical decisions and/or does not have a terminal condition.

POLST medical orders travel with the patient from one healthcare setting to the next, and even home to be followed by EMTs in an emergency. Using medical orders that were written weeks, months or years earlier is not sound medical practice.

Tilted toward refusal of treatment

POLST facilitators follow a script according to which they present treatment and care options as if all medical decisions are morally neutral.

The Respecting Choices program distributes fact sheets for POLST facilitators to use to educate patients. The “Long-Term Tube Feeding Facts” sheet concludes, “Whatever you decide, plans can be made to follow your wishes.”[1] It does not explain what those ”plans” might include, so I will. When tube-feeding is withheld from patients who are not otherwise dying (hence the word “long-term”), they will be given “comfort care” which often involves sedating patients to unconsciousness to prevent them from experiencing the pains of thirst and hunger as they die of dehydration. This is a form of euthanasia, which is both unethical and immoral.

Patients answering POLST questions may not be aware that, even if they could recover, treatments they refuse will not be provided and they could die as a result. What if an elderly person is in an accident? Will he be given the life-saving treatment he would probably want in this situation? Or will he be denied it because of some boxes checked by a POLST facilitator?

The way questions are phrased can manipulate patients’ responses. For example, a facilitator may ask, “Do you want comfort care? Do you want us to focus on keeping you comfortable?” The patient says, “Yes of course,” not realizing that this answer will be interpreted to mean, “Stop efforts to treat my illness and only provide comfort measures.”

The POLST form is designed for only one thing—refusal of treatment. A typical POLST form states, “Any section not completed implies full treatment for that section.” Therefore, if a person wants full treatment, a POLST is pointless.

John M. Haas, president of the National Catholic Bioethics Center (NCCB), in a letter to the Secretaries of Health and Human Services and the Veterans Administration regarding POLST, dated June 7, 2017, noted that “evidence suggests that such approaches have more to do with cost saving than the protection of informed consent. In fact, the very means by which costs will be saved is the premature death of a patient through the denial of basic care.”[2]

Listening to POLST’s advocates leads to the conclusion that POLST is indeed a strategy to cut spending on medical care for the most vulnerable patients. For example:

According to the National POLST Paradigm website (polst.org), “The POLST form is for seriously ill patients for whom their physicians would not be surprised if they died in the next year, not for all patients.” Despite this qualification, POLST’s reach is expanding.

Case in Point: Jo Tolck, Vice President of the HALO Board of Directors, received a call from a woman in Minnesota who had been given a POLST form at her doctor’s office when she was there for a procedure necessary to have a prescription renewed. She reported being strongly encouraged to sign the POLST form. However, having read Informed: A guide for critical medical decisions[5], she knew this was not a good idea and was incensed at the pressure being put on her to sign the POLST. The staff member finally asked her to take it home and think about it.

Case in Point: An attorney in Wisconsin, who has “heard many stories like this,” reported: A woman in her forties came to the Emergency Department at a local hospital. She was in such respiratory distress that she could not talk. While waiting for a doctor, she was approached by the unit clerk who wanted to complete a POLST with her. The nurse, who had brought the woman to the hospital, intervened and stopped the POLST process. The ward clerk said it was their policy to do a POLST on any one with respiratory problems. The woman’s problem was an allergic reaction to a new medication. An Epi-Pen injection completely restored her to health.

I have also received reports from credible sources that some nursing homes require every resident to have a POLST, even though many people live in nursing homes for several years or more.

No other type of advance directive requires a healthcare provider’s signature. Every other advance directive requires the signatures of the person making the directive and witnesses, yet many POLST forms do not require either. For instance, the La Crosse Area (Wisconsin) POST merely recommends the signature of the patient or surrogate and no witnesses are required. Incredibly, this POST form permits a physician or NP to initial a box “to verify that the patient or surrogate consent to these orders but was unwilling or unable to sign.” If a person was unwilling to sign a document, it is doubtful that the person consented to it. Without witnesses, how can we prevent fraud and protect patients from being coached or coerced to refuse treatment?

As a routine part of a visit to the doctor, Medicare started paying for conversations about “advance care planning” in January 2016. The goal to is get patients to fill out advance directives such as a POLST.

Advice: According to the National POLST website, completing a POLST form is always voluntary. Do not allow anyone to push you into it. When approached with a POLST form, firmly state, “I have a Medical Power of Attorney for Health Care[6] which will go into effect if ever I need my agent to make decisions for me. Until such time, I want to discuss my condition and treatment options with my attending physician as needed. Please respect my wishes.”

[1] http://www.northtexasrespectingchoices.com/wp-content/uploads/MC760-E-TubeFeedFacts_v9-15.pdf
[2] https://www.ncbcenter.org/files/4715/0896/0198/HaasPolst.pdf
[3] “A POLST form for Texas: What is it and why is it important?” A presentation to GETAC Medical Directors, Robert L. Fine, MD, FACP,https://www.dshs.texas.gov/emstraumasystems/POLST.pdf
[4] Modern Healthcare, 6/11/2015, “‘Revolutionary’ change for life’s final choices would reduce unwanted care,” by Andis Robeznieks]
[5] https://resources.humanlife.org/pdf/informed.pdf
[6] See “Advance Directives for Healthcare – Part One: The Best Advance Directive is a Medical Power of Attorney,” https://newsletter.halorganization.com/search/label/Advance%20Directives%20For%20Healthcare