HALO Helpline/Prayerline 1(800)221-HALO(4256)
ly for her assistance in the last few weeks of Dad’s life. I can’t thank Jo enough for her commitment to respecting and honoring the God-given dignity of my father and helping us discern the “right” and “wrong” in a very broken care giving system.

There were good caregivers, and I certainly do not want to negate that. We are very grateful for the care and very hard work of one doctor and many nurses in getting him well enough to leave the hospital. However, the strong and continual pressure exerted on my family to allow my father to be unnecessarily sedated was very distressing. In addition, we were unduly pressured to “find a hospice organization” before we left the hospital.

With calm determination, we did take charge.
Prior to his hospital discharge, we attended a “palliative care meeting” where we were told his situation was dire, and that we would “need” to decide on hospice care. That was confusing, because he was going back to a long-term care facility. Why did we need to choose a hospice when care would be provided by the facility’s staff? Plus, three members of the family were “tag teaming”; he would never be alone. It was hard enough to face everything we were going though without being told “you need to do this.” Despite our objections, we were each handed a generic Hospice and Palliative Care book provided by the hospital. Who had time to read a book?

The HALO fact sheet “Drugs Commonly Used in Hospice and Palliative Care”(https://halorganization.com/pdf/drug-sheet.pdf) was an invaluable guide for our family. My father had dementia. Previously, when Dad had surgery, we had learned which drugs were not appropriate for him due to his dementia and age. The HALO fact sheet helped us work with the medical professionals to ensure that he received appropriate treatment for pain and agitation when needed. At first, the medical people at the long-term care facility were not cooperative. Nevertheless, with calm determination, we did take charge.

We asked for a print out of Dad’s medications and their dosages so that we would be aware of everything that was being given to him. We preferred that his medications not be “scheduled” and wanted his chart to state that his medications were to be given “PRN”—that is “as needed.” We made decisions based on what we observed and what he said his pain level was. Had he been overly sedated, he wouldn’t have been awake to let us know if he was in pain. Also, we wouldn’t have seen him smile and heard him talk or laugh! In fact, Dad rarely experienced pain. At one point, we asked him several times an hour to make sure. He would say no or shake his head. Most of the time, his facial expressions would confirm that he was not in pain. When his respirations started to increase, we knew he was uncomfortable and addressed it. When we saw that he was thirsty, we spoon fed him thickened liquid (he was at risk of aspiration). He loved the thickened “ice cream,” as we called it!

Because of my father’s multiple serious health issues, we were aware that his life was fragile; we were certainly not in denial of this. However, I saw my father as living and present to us. Every moment was an opportunity to care for him and show love to him; to try to understand his needs and do all that we could to help him.

There was obviously no need for hospice, but the pressure mounted.

There was a care conference within 48 hours of his return to the long-term care facility. This time we were given a list of Hospice Organizations around the Twin Cities (Minneapolis and St. Paul, MN). The staff members at this meeting firmly intended to get this hospice idea into our heads and hoped we’d make a decision in the next 24 hours. We had no intention of choosing one, but out of curiosity I called a few of them. I immediately saw the red flags. From the article “Interviewing a Hospice Agency” in Informed (https://resources.humanlife.org/pdf/informed.pdf), a publication edited by Julie Grimstad (president of HALO), I asked question 3: “Is your Hospice agency pro-life?” Not one person even knew what “pro-life” meant, regarding an older person like my father.

The hospice agencies I contacted uniformly answered that their visits were primarily once a week, for about a half hour at a time. Really? How do you get to know anything about a person, let alone one who may be sleeping, in that short amount of time? What kind of “comfort” can you really give him when he is a stranger to you? What are you going to do for him anyway? I was completely confused by all of this!

The most shocking event happened the day before my dad passed away. The last nine nights of my dad’s life, I slept on a cot by his bed. Usually, by mid to late morning, my mother would arrive at my dad’s room and I would go home for awhile. That day, I just happened to stay later. A woman representing a well-known hospice organization walked into the room. I was sitting in the corner. She looked startled when she saw ME there. She focused on my mother, without even a glance at my father lying in bed. My mother was in a vulnerable position at that time. She had the slight belief that hospice could possibly do something “good” for my father. Hospice today is not at all like it was in the past. My mother was clearly confused, and this woman was putting pressure—albeit “compassionate”—on my mother to sign up for hospice. My mother, clearly unable to make a decision, asked me what we should do. Her dear husband of 58 years was dying.

I thanked the woman and told her we were not interested. Then, suddenly, a thought occurred to me, so I looked at her and asked, “What ARE you going to do for him?” The woman was obviously surprised at my blunt question. She responded that hospice knows more about pain control. I pointed out that Dad wasn’t in pain, but only became a little agitated at night sometimes. His agitation was relieved by a low dose of medication. There was obviously no need for hospice. She left the room, but I later noticed that she was still sitting outside with a nurse, possibly waiting for me to leave so she could approach my mother again. I stayed with my mother and father until I was certain she had left the facility.
That situation told me all I needed to know. This hospice representative had intended to speak only with my mother. She had tried to create a division in the family, knowing full well that other family members and I did not want hospice. My grieving mother was lost and confused. She needed her family to help make decisions. In the end, Hospice did not show any respect for my father’s life or for his family’s wishes. 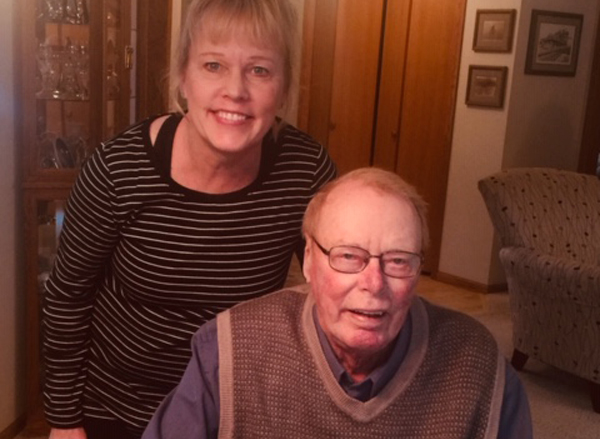 We had many beautiful moments with my father before his death.When my father passed, I was so grateful to be at his side. I believe he passed into his eternal home in our good Lord’s timing; peacefully—without being in a drug induced unconscious state. We were able to communicate, hug him, laugh and cry with him almost up to the day of his passing. We had many beautiful moments with him that I will never forget.

NOTE: For assessing a decision on hospice, consider this resource: Questions to Ask a Hospice Before Admission